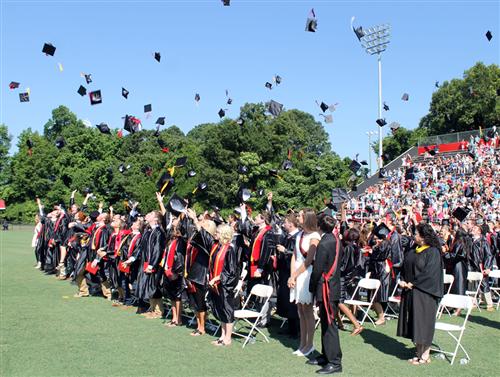 The Gaston rate of 86.3 percent is higher than the state graduation rate of 85.4 percent.

The district?s graduation rate has increased each year for the past six years. And for the first time, Gaston?s ten high schools have a graduation rate that exceeds 80 percent.

Called the four-year cohort graduation rate, it reflects the percentage of students who entered the ninth grade in 2011-2012 and graduated four years later in June 2015. The rate is higher than last year?s mark of 83.5 percent, and since the state first calculated the graduation rate in 2006, Gaston County Schools has increased 18.2 points from 68.1 to 86.3 percent.

?We are extremely pleased to see our high school graduation rate improve for the sixth consecutive year ? this is a significant accomplishment for our schools,? stated Superintendent of Schools W. Jeffrey Booker. ?Our ultimate goal is to have every student graduate from high school and experience success in college and the workforce. The steady increase shows we are moving forward in our efforts to achieve this goal.?

Booker says increasing the graduation rate is a team approach that involves administrators, teachers, counselors, social workers, nurses, and other support personnel working with students and parents on truancy and dropout prevention. He believes programs that focus on character education/bullying, discipline, and counseling/mental health also help the school district?s efforts to keep students in school and on track for graduation.

It is important to note that the four-year graduation rate is not the same as the dropout rate, which indicates the number of students who drop out of high school in a given year.

Here is a look at several graduation rate highlights:

The post Gaston’s graduation rate is the highest ever appeared first on Gaston County.